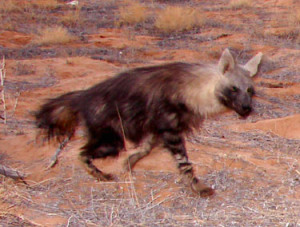 The brown hyena is very crafty and tricky prey.

The spotted hyena is widespread across much of Africa, but there are two species of hyena in southern Africa. More solitary, more silent, more nocturnal—and in my experience even warier—is the brown hyena. Slightly smaller than the spotted variety, he is actually a good-looking dog, with long shaggy hair and striping on the legs. Generally an animal of hills and drier country, he is actually relatively common across northern and western South Africa and much of Namibia. In many cases a special or specific license is required, but he is definitely plentiful enough to hunt, and is huntable. He is not importable to the United States. Although not considered endangered by CITES, he is inexplicably listed under the U.S. Endangered Species Act. So I knew I couldn’t bring him home, but I wanted to hunt him…specially after I tried and failed.

Like anything else (including my spotted hyena), a brown hyena can be blundered into in the daylight—but most of the time it will be a night hunt. The first time I tried, up in the Limpopo Valley, I sat in a tree every night for a week by myself. We had brown hyena on trail cameras, and I had tracks approaching my baits—but I never got a glimpse of the animal. Once he fed right in front of me, or so said the tracks, but it was too dark and I neither saw nor heard him. A couple of times the tracks showed that he approached, and then turned away. I came away with a lot more respect for this little-known night predator.

After that I tried several times, off and on, in Namibia. Most times nothing happened, but one night Dirk de Bod and I definitely had a hyena coming to the bait. The baboons told us, and the roosted birds told us. He was getting close, and then I felt a cool kiss on the back of my neck as the wind shifted. This would often not bother a leopard intent on feeding, but that was the end of that brown hyena. The next morning the tracks were plain: Walking slowly but confidently toward the bait, just where we thought he was…and then about 80 yards out, running tracks the other way. Unlike many animals (including leopard) a brown hyena spooked from bait seems unlikely to return for quite some time!

I had pretty much given up until South African Benand Els showed me the huge brown hyena he had mounted in his home…and introduced me to the PH who got it for him, Tino Erasmus of Trophy Game Safaris near Polokwane.

Once on bait brown hyenas seem to be habitual; so long as the bait is replenished it seems possible to keep them feeding almost indefinitely…until they are disturbed.

I flew in early in the morning and Tino met me at the Safari & Outdoors store in Pretoria. Good thing. I had my rifle but no duffel (or ammo). We waited while they whipped up some handloads for my .264, but it was getting late by the time we started north. We got to Tino’s excellent lodge with just enough time to check zero and have a quick bite, and it was already full dark when we got into the blind. This didn’t worry us. The trail camera showed that he had come the night before at 2:30 AM, so we were expecting a long, cold night in the blind.
Boddington and PH Tino ErasmusBoddington and PH Tino Erasmus with a big, well-furred brown hyena. The successful finish was the result of lost of preparation on the part of the PH—and, for Boddington, numerous failed attempts elsewhere. 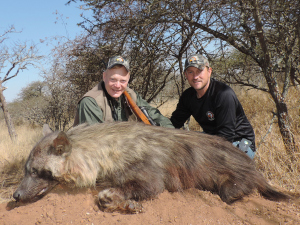 Boddington and PH Tino Erasmus with a big, well-furred brown hyena. The successful finish was the result of lost of preparation on the part of the PH—and, for Boddington, numerous failed attempts elsewhere.

In the dark, moving slowly, it took quite a bit of time to set the rifle on the rest, put whatever might be needed close at hand, wrap a blanket over my shoulders, practice the move to the rifle, and so forth. The moon was up but low, the impala carcass just a dark blob at 75 yards. It seemed I had just settled into my chair when Tino whispered, “There’s already something to the right of the bait.”

As I leaned forward he said, “It has to be a bushpig, but I’m not sure yet.”

Through the scope I could clearly see an animal, broadside…and then it occurred to me that pigs don’t have long bushy tails. A trick of darkness…or a brown hyena? Tino saw this, and also saw the erect ears when the animal turned its head. He gave me the pre-arranged signal, a tap, but by then I was certain and ready. The shadowy animal had shifted slightly and was quartering, but I was still certain I could visualize the shot. The rifle went off, the animal seemed to run to the right, back into the bush…and all was silent again.

We waited a few minutes, then called the trackers and began the search. In the dark there was no trace. We were both certain of a hit, but how good (or bad)? It was almost time to go get a dog, but Tino made one quick circle with a thermal imaging device. He found it immediately, down in long grass within yards of where we searched.

It was a very big dog with long, luxurious coat, and a huge skull, a great end to a long saga. Since I can’t bring it home I can visit it at Safari & Outdoors. But now it occurs to me that there is a third hyena in Africa, the equally beautiful striped hyena found in northern Tanzania up through Ethiopia. I haven’t a clue where to find one—yet–but if I feel like another hyena quest I’ll start with SCI’s online record book.– Craig Boddington.